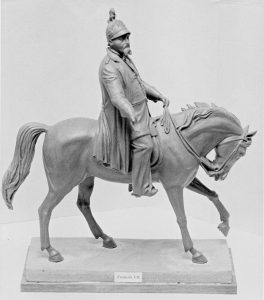 This first figure is not, as subsequent figures, created from the bottom but is molded in an already existing mold. This does not, however, make this figure less special than the other of the Society’s annual figures for the shape of the figure are made by none other than Royal Copenhagen. Hof kandestöber Hans Christensen Høy and the mold were already almost 100 years old in 1955.
The figure is not round mass as the figure on the picture above but a flat tin figure, but unfortunately it has not been possible to locate a picture of the finished figure. 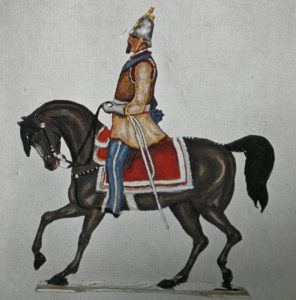 The beautiful and interesting figure that all participants in the anniversary celebration was given represented King Frederik VII  in Hestgarden’s general uniform.
In the figure he wears the characteristic aluminum lion helmet, which he also wears on the equestrian statue in front of Christiansborg Castle. He did not receive this totally un-Danish headgear until after 1850, so the figure must be from after this time. 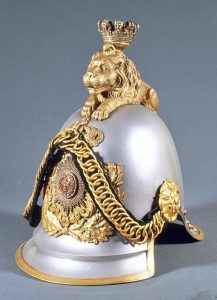 The shape of the figure is perhaps the first Danish commercially produced portrait figure and the form still exists today and can be seen at the Technical Museum of Denmark.