The 1991 annual figure is a private of the “Grenadier Corps”. The twin brother of the life guards, created on September 18, 1701 by the Grenadier companies in the recruited foot regiments:
Life guards, Queen, Prince Georg, Karl Kristian, Zealand, Funen, Jutland, Oldenburg, Schwartsel and Mørner. 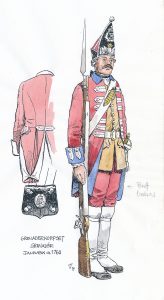 The Corps participated in the same campaigns of the Great Nordic War, as Garden at Foot, with which it shared honor, fame and rank. Grenaderkorpset had its place in the battles on the left wing of the foot people’s first encounter and Garden’s place on the right wing. It was both the most dangerous and the most important items.
In peacetime, it always had garnision in Copenhagen and on August 8, 1768, it was united with Garden at Foot to a Regiment of 14 Companies, which in the same year participated in 2 units:

So, this is an elite formation that has played a significant role in a troubled period of the country’s history.

The figure for the figure is a plan created by one of the Society’s members Christian Würgler Hansen, and the figure itself in 54 mm is made by the Spanish figure-maker Ramon Labayen.