If Your interest is model figures in Danish uniforms, there is a problem, because only a few have been produced, but with a little bit of skill one can convert figures from other countries’ armies so that they came to look like Danish soldiers.
It is even more difficult when we talk about artillery, because there are not many different models and most cannot be converted to look like Danish artillery. 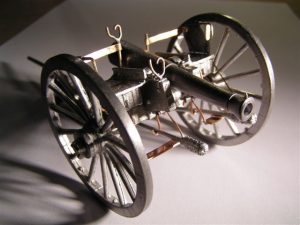 There are not already detailed reproductions in 54 mm the size of the famous Danish 1834 shooting system, which was used by the Danish army in the two Schleswig wars, 1848–50 and 1864. Therefore, two of the Society’s members, Einar Hansen and Hans Chr. Wolter, over the great task of creating a model of a Danish artillery piece of the M / 1834 system from scratch.

After a series of extensive artillery attempts, a new iron firing voice, called 1834 or Fiber’s system, was introduced after the constructor, Jacob Scavenius Fibiger (1793–1861).
In the past, the field guns in bronze had always been cast – in Denmark since 1756 at Frederiksværk. The new system at one time marked the highlight and end of the smooth-running artillery history. System 1834 included all types of artillery. The field artillery consisted of 6 and 12 pds. ball guns and 12 and 24 pds. grenade guns.
System 1834 was a suitable and up-to-date shooting system, which during the three-year war did not stand back for the opponents’ field artillery. 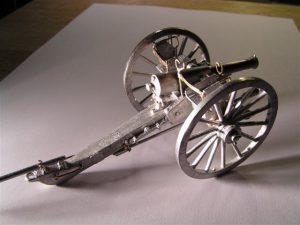 The modeling was performed on the basis of the original construction drawings at the Tøjhusmuseet in Copenhagen.
The meticulously crafted parts were put into rotational molds to achieve the highest level of detail in the finished result.
Modeling: Einar Hansen. Production: Hans Chr. Wolter.