Tin soldiers, as we know them, saw the light of day in the mid-seventeenth century when the first mass-produced figures of the Prussian king Frederick the Great and his guard came to market in Germany produced by the Hilpert candlestick family in Nuremberg.
The Napoleonic era, with its colorful uniforms and soldier’s joy, further enhanced the imagination and production, with the result that tin soldiers in the following years became ordinary toys for the bourgeois children. Before that, tin soldiers were reserved for the nobility, the more affluent bourgeoisie and in the training of officers.
In fact, they became so common that H.C. Andersen, as you know, uses a tin soldier as the main character in one of his most famous and beloved adventures – the steadfast tin soldier.
The German tin soldiers were all of the already known flat type and it was then also a German, E. Heinrichsen from Nuremberg, who set the now internationally recognized scale for flat figures – 30 mm for footmen and 40 mm for riders – the so-called Nuremberg size.
The “real” flat figures are almost all cardboard thin and are engraved in a very low relief on both front and back. The figure or figure group is cast in one piece ie. that there are no parts to be assembled after the molding.
The painting of flat shapes makes the same demands on the artist as if it were a flat canvas he painted on. The figure’s “roundness” is created with light and shadow. 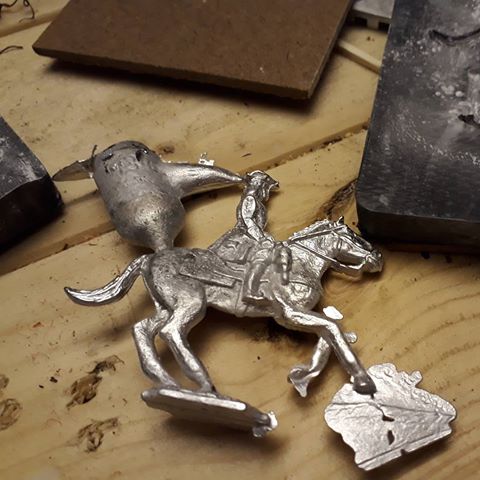 The Society’s members each have a fantastic knowledge in many areas also within modeling and painting and over time, several members have chosen to share this knowledge with the Society’s other members through articles in the Society’s journal. The following links contain examples of this:

How to engrave a form to flat tin figures

How to cast a tin figure – Video