In the years after the seven-year war one started to set up light wards already in peacetime in the European armies. When they had come to play a major role in the North American War of Liberty, they were around 1780 years in almost every army. In 1784, the 16-year-old Crown Prince Frederik took over the government and when Gustav III of Sweden had begun to reassemble strongly at the Norwegian border, the Crown Prince set up a commission to come up with proposals for improvement of the army. At the head of this, his uncle Prince Carl of Hesse, an energetic and insightful officer, was very interested in the easy service. One of the first results of the Commission’s work was the establishment of the Hunter Corps in Zealand and Holstein. Initially, it became a company of 100 men plus commanders and officers. 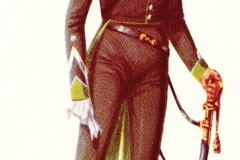 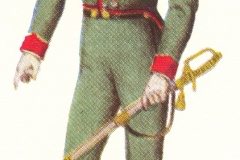 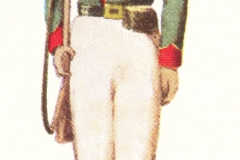 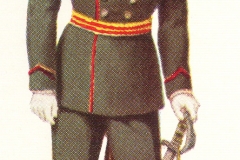 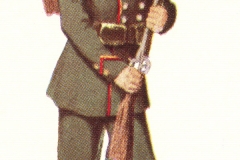 [Show slideshow]
As the first commander was appointed major in the infantry chamberlain Andreas Undall. He was born in Norway and when he came to Helsingør in Kronborg, where the Zealand Jæger Corps was stationed, his little son went to Norwegian national costume and it came to form the model for the hunters’ uniforms that came to consist of a green dress, under This wore the hunters a yellow vest and yellow pants, upside down a curved hat with white pon pon with green tip, long boots on the legs instead of the infantry’s hated short boots. The hunters who were supposed to dare at night were instead given a raincoat instead of tents. They had handed rifle and hirchfänger and triangular bayonet. The crew was recruited and confessed to one of the three faiths: Lutherans, the Reformed, and Catholicism. It was selected personnel, as the king decided that one should be a Danish citizen, “have a good exterior”, as it was called, “seems to have genius”, it had to be documented with certificates that one was unpunished, which was unusual, one would like to that the elect had knowledge of forestry or were hunters, at least they should be able to shoot well.

With the founding of the hunter corps, the foundation stone was laid for the later subversion, as the hunters were promised posts in the suburbs after the service ended. Thus, the hunters were also repatriated with their estuary, which means that today there are no hunter uniforms at Tøjhusmuseet.

It is Sjælland’s Jægerkorps, or 2. The hunter corps as the current hunter corps has a department mark from and also its glorious history. Through the lessons they participated in, the battle of the nest 1801, when the Jæger Corps was not on board and fought, but was posted along the Øresund coast. Below, the Corps suffered a single loss of human life. In 1848 and 1864, the Corps, which says “bravely and with great losses,” fought. However, it must be noted that the Hunter Corps was not used for the type of battle it was created for, the Corps was then also changed to 18th battalion during the 64th war. However, the story tells that they were different: The fight at Oversø on April 24, 1848, here the Jægerkorpset with 200 men succeeded in slowing down the prussians’ progress with 5000 men against Flensburg so much that the force stalled and did not reach in time. The hunters, however, were overpowered and General Wrangel wanted to see the oldest responsible officer who had caused this. The general expressed great appreciation and presented Captain Scharffenberg, who had met the boss who had fallen, his saber. The corps was tasked to remain in the positions during the storm at Dybbøl on 18 April 1864. They secured a safe retreat over Alssund to Als.
The 18th Battalion ended up being shut down as the Defense Defense Battalion in 1953, but that story lives on in today’s Hunter Corps which took its name after the 18th Battalion when it was founded in 1961.