THE BATTLE AT SEHESTED 1813

When speaking about the England wars, one usually refers to three separate parts: the Battle of the Row in 1801, Copenhagen’s bombardment in 1807 and the subsequent cannon boat war from 1807 to 1814.
But on July 10, 1813, Denmark joined the federation with France and committed itself to the ceasefire between the great powers ceasing a corps of 10,000 man footmen, 2,100 riders and 40 guns for Napoleon’s disposal. 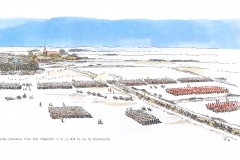 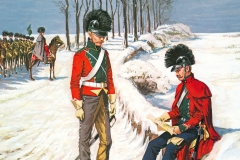 [Show slideshow]
When the war against England, Sweden, Russia began again on August 16, the little Danish army moved under the king’s brother-in-law, Frederick of Hesse, down Holsten to join a French Armor Corps under Marskal Davout, who lay at Hamburg.
But when Napoleon, after the Battle of Leipzig on October 18, 1813, had to give up his position along the Elbe, Davout pulled his troops together to keep Hamburg as long as possible, and the Danes could no longer wait for help from him for Holsten’s defense. What is surprising is that Denmark should defend Norway in Holstein against the Allies. The Swedish Crown Prince Carl Johan hoped to surround Frederik of Hesse, but in the honorable battle of the heath at Sehested on December 10, 1813, the Danes crossed over and reached Rendsborg west of Kiel, where they enclosed themselves in the fortress.