In 1842 the Husarregiment changed to the “Guardehusardivision” which together with The Lifeguard tat Horset formed “The Horse Guard” – this designation was changed in 1843 to “The Royal Horse Guard”. The merger lasted until 1854. 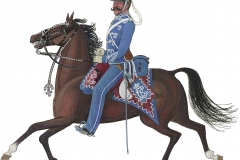 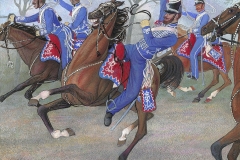 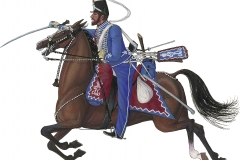 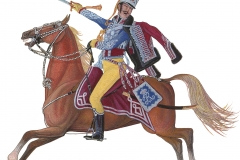 [Show slideshow]
1 2 ►
The Guard Husar division was once again organized as a cavalry regiment under the old name “Husarregimentet” (a division in the cavalry is the term for 1/2 cavalry regiment) by a merger with the 1st Dragonregiment 1856.

In 1857 Husarregimentet got its current name “Gardehusarregimentet”. This name has since been worn by the regiment without change. This is absolutely unique in the Danish army. Only the Royal Life Guard has also retained its name from ancient times. All other regiments have been named after the Second World War.