The army of the young monarch was dressed in light gray dresses. In 1711 it was decided that the army should have red dresses, a color that was maintained until 1848.
In the majority of the period, the regiment managers had a great influence on the uniforms of their regiments. However, all changes were, in principle, to be approved by the King and the General Commissioner, however, several examples are known that, without permission, the executives purchased materials that would change the appearance of the uniforms so that in 1745 a royal resolution was established, “that all infantry regimes should be equalized cut. 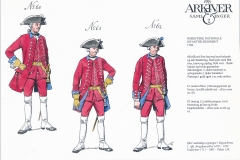 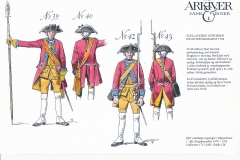 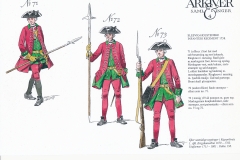 [Show slideshow]
1 2 ►
In 1756 new uniforms were approved for the Danish army, but as these uniforms were created, considerable differences arose between the individual regiments.
In 1758, the Danish army’s regiments were asked to submit drawings of their uniforms so that King Frederik 5 could form an overview. The drawings showed that there was a need for tightening in the area, so that the army could appear with a more uniform feel. The King therefore issues provisions on the Army’s uniform:
At the recruited regiments, the dresses were to be equipped with discounts in the distinguishing color in the future, the sleeve layouts had to be open / worn, and the end fur should be in the marking color.
At the national regiments, the dress had to be without discounts, but above all they should have a collar on the dress and round closed sleeve lookups in the marking color