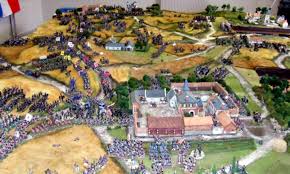 The war game probably comes from various board games, of which the best known is the chess game. In recent years, there have been a myriad of different war games, where you operate with pieces on a game board that is divided into fields – usually in the form of a map.
War games have, over time, been used in officer training and planning of campaigns and operations.
What started out as a pure nursery is developed for highly scientific strategic games based on mathematical formulas and probability calculations, where all the conditions that play into a war – morality, the weather, the supply situation and so on. – taken into consideration.
In the beginning, different sizes of characters were used for the war games. In the European countries, 20 and 30 mm flat shapes were used, while 54 mm figures were used in the UK. The use of the 54mm figures made it difficult to operate with larger forces, so the English war games largely dealt with each man’s struggle, with how to avoid being killed – or were killed.

As one found the need to be able to play battles with whole armies, one got problems with space for the war game and in the 1960s one started to go over 25-30 mm round figures to both work with larger units but also because the round mass figures gave more realism to the war game than the flat characters.
The newest on the market are 15 mm figures, but also figures and material of 9 mm (1/200) have begun to gain ground and they allow to operate over large areas, although you may have nothing but a regular dining table for available
The terrain models you play war games are very different depending on how much work you put into making it realistic.

The sand table is the oldest form of war games and is used today
Army Officer School, but it is by nature difficult to fit into most modern homes.

Terra-plates of various sizes are very widespread. Either with painted or built-up landscape formations, which can be assembled in different ways and thus provide new terrain.

If you have enough space to let the terrain stand, you can build up the individual boards with fixed terrain elements such as. hills, forests, streams, buildings, etc. – otherwise you must leave these loose so that you can pack the terrain together if necessary. for transport without destroying the individual terrain objects.
Once you have decided to go over war games, you have to set up your forces and here you have to consider whether you want more armies from different countries, a single division, a battalion or a full infantry company. Should the units be set in a ratio of 1: 1 or x number of figures represent a unit size eg group or division, and which figures are on the market.
Regardless of what you decide to do, it requires careful research to reduce the relationship between reality and “table size”, but here is also help in many of the “game rules” for war games.
When the troops and the terrain are ready, you can start playing.

For those who want to read more about some of the games of war that the Chakot members have played, and how to build different things for their war games, it is recommended to look in the War Games in the rightside menu on the front page of the Society’s website.