German poet Goethe speaks in poetry and story about a boy and a girl playing with some tin soldiers “round, massive and meticulously done”. It is the earliest known literary reference to round mass figures and therefore of great importance. It is known that French tin figurine producer Lucotte began to work before 1789, but virtually none of his figures were made before 1850, of these, on the other hand, there is a unique collection at the Duke of Marlborough’s Castle Blenheim.

They are still unsurpassed among the actual toy soldiers and are cast from a mixture of lead and antimony and soldered to a tinplate footplate. The footmen are 6–7 cm tall with riders and horses of similar size. The equipment is soldered to each figure. Riders and saddle rugs are loose and stuck at the man’s seat. The soldiers have been to the British statesman Sir Winston Churchill, who describes them in his autobiographical work “The Young Years”

The round-shaped figure is cast in contrast to the flat figure in several parts which one has to put together for the final figure. 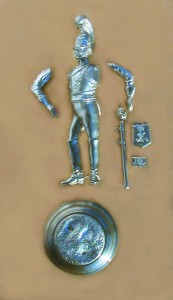 The parts before assembly

The shape of a round mass figure is made in a different way than the shape of the flat shape. When you have to make a shape for a circular mass figure, you put your “master figure” in a wax plate. This gives the advantage that you can create a form division that is not plan, but can follow the shape of the figure. After that, put a high frame around and pour heat-resistant silicone rubber into the mold so that the figure is covered by at least 1 cm of material. Once hardened, turn the case over and carefully wax the wax. The last residue wax can be removed with a stiff brush and gasoline. Then the whole surface is lubricated with petroleum jelly and the other half of the mold can now be filled with silicone rubber. After curing – often about 8 hours, the mold frame can be removed and the mold separated. Now you just have to cut an inlet cone for the liquid tin and possibly. thin air ducts.

The Society’s members each have a fantastic knowledge in many areas also within modeling and painting and over time, several members have chosen to share this knowledge with the Society’s other members through articles in the Society’s Magazine. The following links contain examples of this:

How to cast a round-shaped tin figure