Svend Viggo Højberg Nielsen was born on March 15, 1919 in Valdemarsgade in Aarhus. Højberg grew up among horses, first at the 3rd Dragon Regiment in Aarhus and Tønder, and later at the Husarregimentet in Næstved, where his father was a commander and later on. So horses were a big part of young Højberg’s everyday life and came to characterize his artist’s mind throughout his life.

During the occupation, Højberg was a member of a resistance group, otherwise in the same group as the later mayor of Gladsaxe Erhard Jacobsen. In 1946, Højberg entered military service at the 1st Field Artillery Regiment. He was selected as an officer aspirant, and in the spring of 1947 he was appointed to the grain and transferred to the 6th artillery regiment. After serving in Germany, for example, he left the defense in 1949 with a degree of second lieutenant. He then continued for many years as a prime lieutenant in the Home Guard. Through a good friend Højberg heard about the Society Chakoten and joined as a member in 1963. He was and is especially known for his many uniform drawings. Højberg’s main interest in Chakoten was initially to paint tin figures with oil colors, but after developing eczema against turpentine, he had to use only water-based colors.

This put the seed to his well-known uniforms. He took inspiration from the drawings from photos, drawings, original objects, etc. The interest in reproducing the uniforms as accurately as possible made him continuously browse through the years and aimed at his many colored drawings, which have become over the years. Højberg’s first article in the Chakoten was already brought in 1963 and dealt with Husarkompagniet 1737–1746. Since then, many more followed the illustrations about Danish husars through time. But also Danish dragons, Scots from Bonnie Prince Charles’ time as well as French and British cavalry through the ages captured his diligent and careful interest. 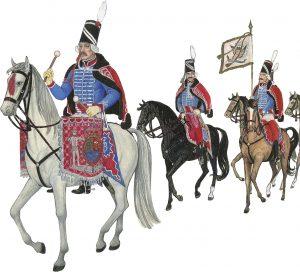 Svend was an extremely detail-oriented person, who most happily shared his knowledge with everyone.
This came to light through, among other things, a number of booklets containing uniform drawings with a color description in both Danish and English, which he published together with the now hobbyist “Model & Hobby”