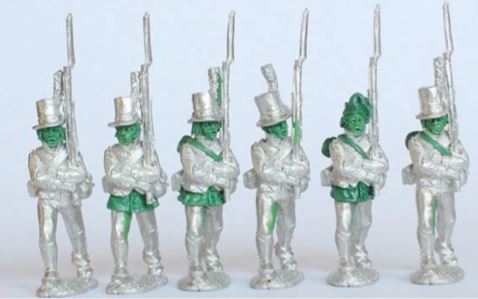 “Modeling and molding is often something that is exercised by the individual in lofty loneliness within the home’s four walls, but it does happen, however, that more people join together for a larger project. It happened among other things. in connection with the Society’s 1807 exhibition where 4 members joined together to build dioramas and frequently exchanged figurative parts and to a great extent knowledge of the uniforms of the period ”
The projects can roughly be divided into annual figures, the Society’s own projects and external projects where one or more of the Society’s members have provided assistance in the form of knowledge.

Among annual figures can be mentioned interchangeably:

Among the Society’s own projects can be mentioned interchangeably:

A cannon from the Battle of Rheden

The latest shot on the tribe of projects is not a separate project from the Chakoten but a series of 28 mm war game characters depicting Danish-Norwegian Footmen, Cavalry and Artillery 1803–14 produced by Allan and Michael Perry from Perry miniatures.
However, some of the members of the Chakot have participated as consultants on the project because of their great knowledge in the field